In our recent discussion of action figure economics, we determined the basic principle that 2 wrestling figures would always beat a single GI Joe. But what if a GI Joe was a wrestling figure?
Sarge never did much for me as a wrestler, but I think he doesn’t get nearly the credit he deserves as a cultural icon. He took a giant chin and a fairly straightforward military wrestling gimmick and ended up becoming a breakout star in arguably the 80’s most popular cartoon show. Wrestling fans loved him, and GI Joe fans loved him, and while there was likely a pretty big crossover there, he covered an amazing amount of ground for a guy named “Slaughter”. And that doesn’t even take the action figures into account.

While I never had the LJN version of the figure, the GI Joe version remained an absolute favorite across all toy lines. Sculpted with much heftier biceps than your average Joe figure, my Slaughter spent his days delivering monster pile drivers to opponents off cliff edges (sofa armrests), and I can assure you, nobody kicks out from that. My fandom likely peaked around the GI Joe animated movie, picking up the Slaughter’s Renegades 3-pack (shout outs to Mercer!), but that didn’t stop me from picking up his pretty awesome Hasbro figure a few years later, made for his 90’s comeback, post-Iraqi heel turn.

The WWE will still trot the old bastard out whenver they need a nostalgia pop, and while he still looks great for his age, I'd much rather remember him as the psycotic drill sergeant who repeatedly elbow dropped Nemesis Enforcer in the stomach while losing his mind. At ease, maggots.
Posted by Robert Rodriguez at 11:16 AM No comments:

First official preview of the first Battling Bastard, Ultimate Carlos! These two reverse colorways were the first ones ever produced and will be included in the first edition of 6, which features exclusively black and white resins.
﻿   I'll be putting sandpaper to resin all weekend and hope to have a preview of all 6 colorways sometime next week.  Come back Monday for a look back at the man who proved that pro wrestling and action figures were a perfect combination.
Posted by Robert Rodriguez at 9:12 AM No comments:

Two wrestlers will always beat a single G.I. Joe, plain and simple.  It was an economic decision when you boiled it down.  The two-packs of old, LJN rubber wrestlers had been marked down to almost nothing, making them a dollar or two cheaper than the price of that new Storm Shadow figure.  As my 7 year old brain processed this simple math equation, I picked up the rubbery tag team and headed down the path of wrestling figure obsession.

My familiarity with pro wrestling was tenuous at that point, only catching glimpses of it during weekend stays with my aunt, who had been a fan growing up (regaling me in tales of her childhood crush on obscure Asian grappler, Kenji Shibuya).  The jury was still out on the legitimacy of the in-ring battles, but I gravitated towards the awesome spectacle of it, appreciating the performers with the flashiest ring gear and obvious charisma.  One particular wrestler stood out among the rest with his awesome 80’s theme song, tiger-print tights, and a mullet that looks like it was crafted with God’s hairspray.  To top it off, his finishing maneuver, the Sleeper, would put the wrestler out cold, allowing the ultimate humiliation of an impromptu haircut while they were still blacked out.

But before Brutus Beefcake had found success as “The Barber”, he was part of a heel tag-team with Greg “The Hammer” Valentine.  Managed by The Mouth of the South Jimmy Hart, the two mid-level stars never made much of a mark together in the wrestling world, which is probably why many sets of their action figures lined clearance shelves in 1986.  But by the time I found them, the team had been split up by the WWF, turning Brutus babyface, and in doing so, turning what was once a crummy tag-team set into an awesome good-guy versus bad-guy scenario.
The figures themselves were about 7 inches of rubber limbs and wrestling bravado, generally posing they way you’d imagine them on an event poster.  Brutus had an arrogant sneer left over from his bad guy days, along with his thumb hooked towards himself, as if to be saying “What has one thumb and will eventually be wrestling’s first hairstylist?” Greg had a pretty standard “Come at me, bro!” stance, and was missing the reversible shin protector that he would soon adopt in the ring.  They came with a set of championship belts and were incredibly sturdy.  What they lacked in articulation, they made up for in flexibility, allowing you to distort their default poses into almost every wrestling hold, including the dreaded Figure 4 Leglock.
The Figure 4 being the regular finishing maneuver of Greg “The Hammer” Valentine, he’d end just about every match he won by grabbing his opponents legs, interlacing them around his own leg posted in between them, and lock in the painful submission hold.  When the Hammer trapped his the dreaded maneuver, his victim would beg and plead for him to release it before eventually submitting to the ref.  While I wouldn’t really  appreciate him until a few years later, Valentine was one of those old school, ugly, bleach-blonde, wrestlers who excelled at making his flashier opponent look better than he actually was.  The kind of beer-fueled brute who would have thrived as a Viking or caveman, but instead never made it much higher than the mid-card.

Over the years as my wrestling figure obsession grew, I, for whatever reason, picked up a second, paint-scuffed Greg Valentine LJN figure, but never had trouble remembering which was the original.  You see, during one of last, epic battles between The Barber and The Hammer, Valentine decided he had enough and he was take out Beefcake’s legs no matter what the cost.  He locked the dreaded figure 4, but no matter how hard he wrenched it in, the plucky babyface would not give in.  Time limit be damned, he kept the hold locked in for minutes.   Hours.  Days, even!  A week or so later, having forgotten that I left the figures rubber legs interlocked for such and extended time, I decided Brutus simply couldn’t take it anymore, throwing in the towel.  As I pulled the two figures apart, I was shocked to find Valentine’s leg bent at the knee, permanently crippled in a way that prevented the figure from ever standing properly.  He had won the battle, but at what cost?  The figure would never be the same, but luckily, a newer, slicker line of wrestling figures was already being shipped out.  And I still had 1 and half wrestlers, which in my book, still beats a single G.I. Joe.
Posted by Robert Rodriguez at 10:05 AM No comments:

The first Battling Bastard to debut will be named Ultimate Carlos and here is the header for bagged figure. I swiped the photo from Lourdes Grobet's amazing book, Masked Superstars of Mexican wrestling, which I'd highly recommend to anyone willing to drop some dough on a classy as hell book of photography. 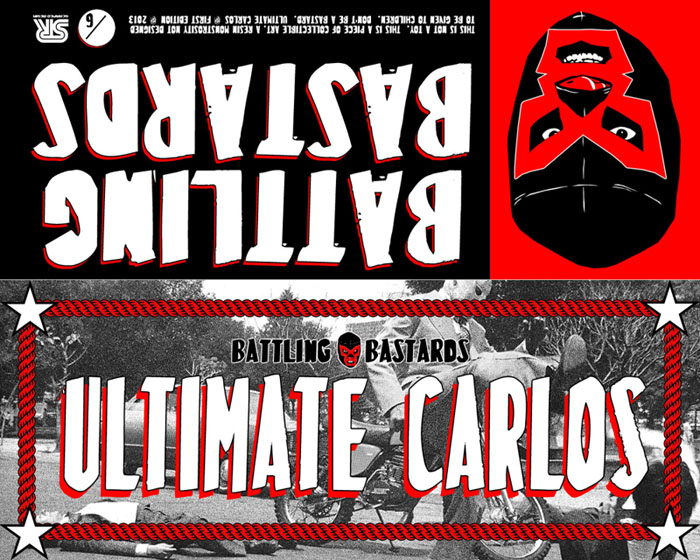 More info on Carlos and the Battling Bastards line, including photos of the finished figures, will be posted next week, along with a look back at some of my favorite pro wrestling action figures from the last 30 years.  Stay tuned, bastards.
Posted by Robert Rodriguez at 1:22 PM No comments:

The Battling Bastards are Coming!

Lock the liquor cabinet and hide your nachos. The Battling Bastards are coming. 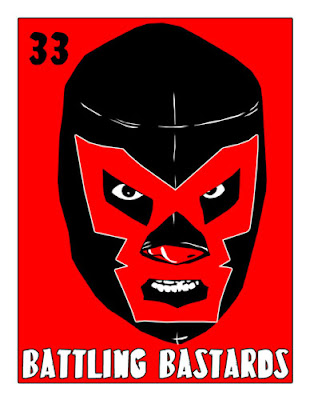 Posted by Robert Rodriguez at 12:36 PM No comments: