The Legend of Pagoda part II 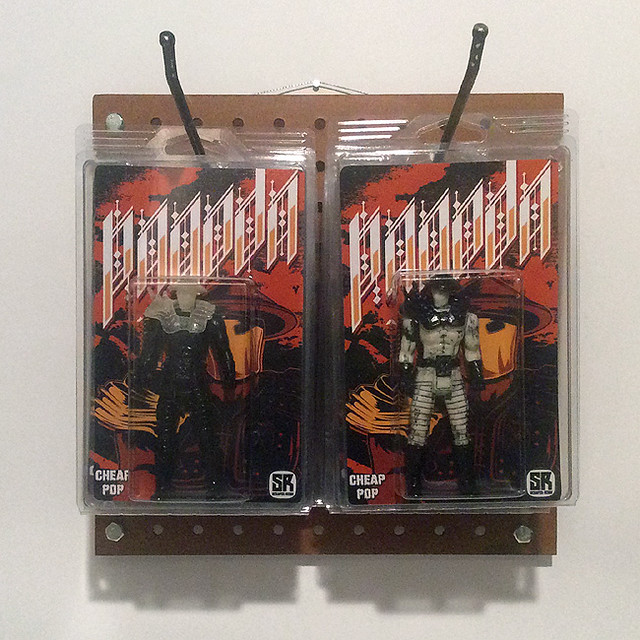 Pagoda is midnight double feature of Road Warrior and Hellraiser 2.  The blood-and-dust ruthlessness of Lord Humungus, warped through the morbid S&M Cenobite asthetic, topped off with a Raiden hat for good measure.  He is the boogeyman of the wastelands, seen by few, but known to all.  Armed with the chains that were rumored to contain him prior to his reign of terror and his tri-spiked signature shoulder pads, he is a supernatural force of nature.  A tidal wave of death and destruction that wouldn’t be out of place stalking Max Rockatanksy or the Lone Wanderer.


Here are two things I wrote when trying to flesh out Pagoda’s origin story: The first is a comic book script for a short two-page story about Pagoda’s parents fucking, hehehe.  I’d like to imagine something like this appearing in the back of on old Dr. Strange comic or something, and is essentially Jason-X fan fiction when you really boil it down.  The bastard son of tentacled swamp yokai and a masked slasher who falls from space, I think the origin goes a long way to explaining how Pagoda has evolved into an unkillable force of nature.  I’d love to see this illustrated some day if anyone with macabre art skills is interested in taking a stab…

Somewhere within the swamps of Cambodia…

-A vengeful demon, who’s appearance is a series of fangs, tentacles and eyes squirms through the muddy waters, searching for prey when a meteor is seen surging through the night sky.

-The meteor crashes into the swamp near the demon, piquing it's interest.  It begins to get closer to the landing

-The meteor is revealed to be a crashed escape pod from some sort of space station.  The door parting revealing a large humanoid figure within.  The demon, sensing a victim on board, begins to shape shift…

-The demon’s transformation is complete as it takes the form of a beautiful, nude Asian woman, slyly covered by her long mane of black hair.  She beckons the man closer, promising to relieve him of his pain.

-She is surprised when the figure, a hulking brute wearing a ripped set of coveralls and steel goalie mask, grabs her forcibly, attempting to make a victim out of her instead.

-Shock gives way to the reveal that she is no easy prey, as she starts to revert to demon form, wrapping tentacles around the masked monster and plunging venomous fangs into the beasts flesh.

-We see the masked face of the brute as her hallucinogenic poison takes effect, and the demon sees the undead evil behind the mask.
-Her vengeance gives way to sympathy and admiration as she probes his mind, seeing the horror that has been inflicted against him, as well as the horror he has inflicted tenfold.

-Her tentacles pull him further into the swamps waters, a feeling that he finds intimately familiar as he allows himself to be pulled under water.

-We see another image of mental hallucination with the demon (in nude female form) wrapping her arms around his shoulders, with the masked brute allowing himself to be physically comforted for the first time in his adult life.

-We see the swamps in the morning light, as a muddy set of footprints can be seen leading towards the mainland, the brute barely visible as he stomps towards his own destiny.  The demons tentacles can be seen happily unraveled among the swamps vegetation, with pink flowers blossoming. 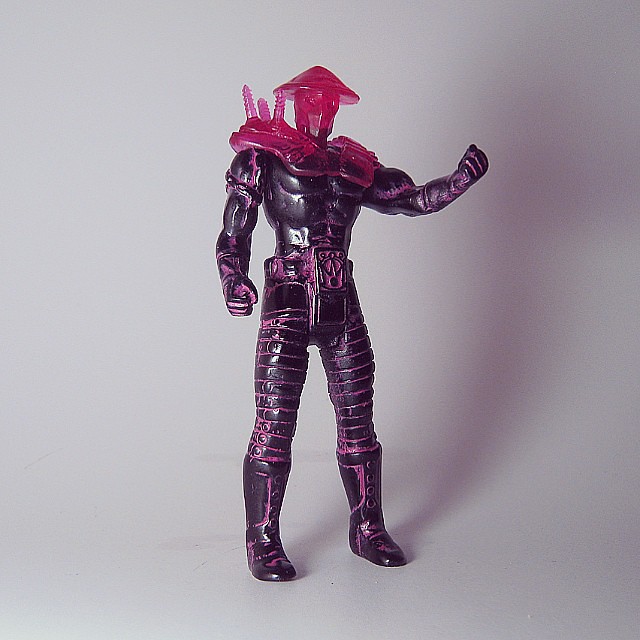 The second part ties his legend to the day the atomic bombs drop, changing the earth into a violent ball of dust and gasoline that was predicted by Mad Max, Fist of the North Star, Fallout, etc.  If it weren’t for the nuclear apocalypse occurring, it’s likely Pagoda would have eventually escaped somehow and became the Michael Meyers of Cambodia, but fate had other plans and as it turns out, being an unkillable force of nature is a highly regarded skill when trying to survive the nuclear wasteland.

The following letter was found within ruins of a Cambodian temple that is rumored to be the boyhood home of Pagoda.

"May Buddha forgive me for what I am about to release.  But man has finally gone too far and fire now bleeds from the sky.  We have failed in our quest to bring balance to this world, but we will not lose peacefully.  Those that have ravaged this world will pay.  May this demon cleanse the earth of those who would corrupt it, so that we may be reborn anew and try again.
This is the first time I've ever referred to the boy within the chamber as a demon.  I felt that word on my lips the first night he was brought to our temple, but now, this close to death, I'm sure that is what he is.  This is his story.
He was brought to the temple as a young boy.  Even then, there was death in his cold eyes.  When our master died the night he arrived, we foolishly took it as a bad omen, but the curse he brought was so much more.  He is evil compounded.  Death personified.  A dark Godling, hatched in the age of man.
We strongly suspected he was responsible when we found his teacher strangled.  But when his classmates were found dead... we should have taken the hard steps necessary.  But the new Master, eager to prove himself capable of great healing, insisted we channel the boys unique talents in a way that would focus him.  So we taught him our art of combat.  And in doing so, we put a weapon in hand of the devil himself.
He seemed to enjoy killing, and all who tried to reason with him quickly died.  By his 16th birthday, he had murdered half of the temple, and it took the rest of us to subdue him.  Killing him would have been in defiance of everything we stood for, so we wrapped him in 1,000 chains and intended to keep him locked in our underground meditation chamber forever.  It was I who agreed to feed him.  When I accepted the task, I intended to poison him over time, but as I looked into his eyes, I did not see a murderer staring back, but instead a demon following the only nature it'd ever known.  I don't think we can blame him for what he is, and shudder when I try to understand how Buddha saw fit to allow him to exist at all. 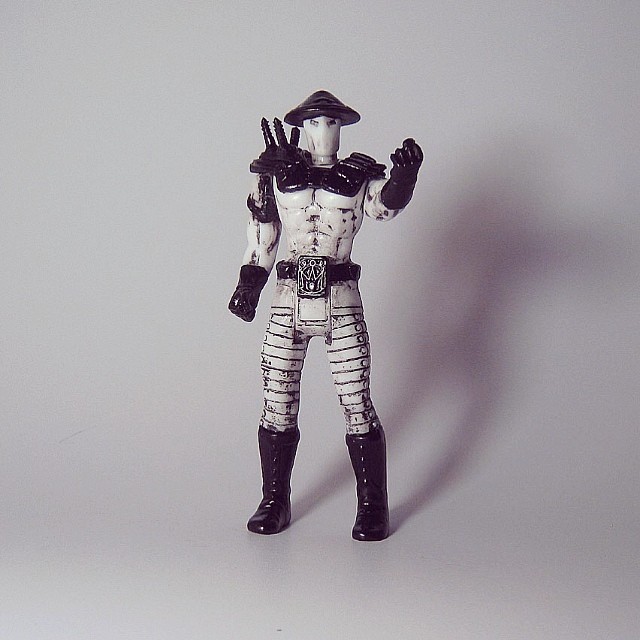 Even with the meager sustenance we provided, he's grown into a hulking brute, spending every waking moment straining at chains that won't break.  Never asking for release.  Never saying a word.  Like a stone pagoda, placing a giant shadow over our temple.
I had almost found peace in this unholy arrangement.  I was beginning to think that our true purpose in life was not to strike balance within this earthly realm, but to instead contain this unholy being from the rest of the world.  But once the first bombs began to light up the night sky with fiery death, and my brothers began bleeding from their eyes, I see now that our path has been compromised.  Our fate is what we make of it.  Powerful men with powerful weapons have seen fit to destroy the world.  But they know little about true power and when they see the weapon that we have unknowingly been sharpening over years, only then will they realize the error of their arrogance.

-The last words written by an anonymous monk, moments before he was strangled to death 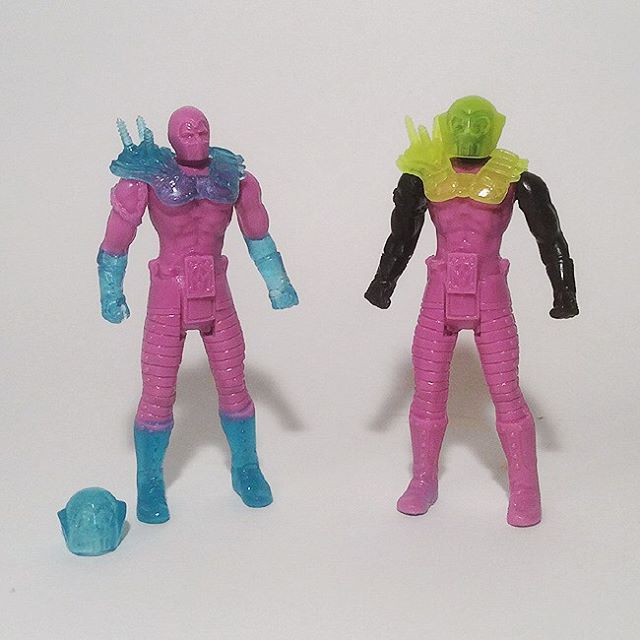 Finally, some of you have noticed the 2 chase variants, both featuring a resin helmet instead of his signature mask/hat.  These are parts from a collaboration with the illustrious Mark Ultra on our Lord Demonico figure (DCON 2013 exclusive), and I'd like to imagine an alternate timeline where Pagoda was transported into Demonico’s dimension and not only defeated him, but stole his time helmet, allowing him to unleash his terror throughout the annals of time.
Again, prime comic book material that I’d love to flesh out further somewhere down the line.  These two variants will be go out on two random orders, and are some of my favorite Scraped Resin pieces of all time. 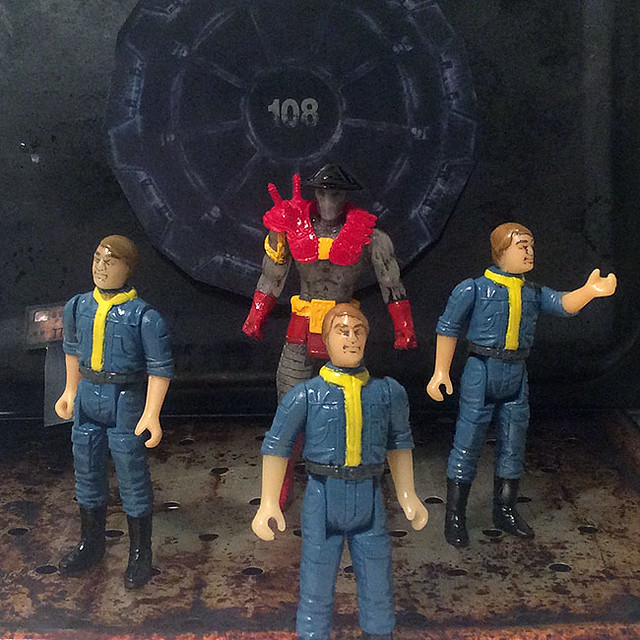 Pagoda, his variants, and the opportunity to get a free Vault Clone are available at the Scraped Resin online store.  And don't forget to hit up Cheap Pop Shop, who put together the shiny and chrome packaging artwork!

Posted by Robert Rodriguez at 12:34 PM No comments: