It's the mayor that comes packaged as a vintage sports star! 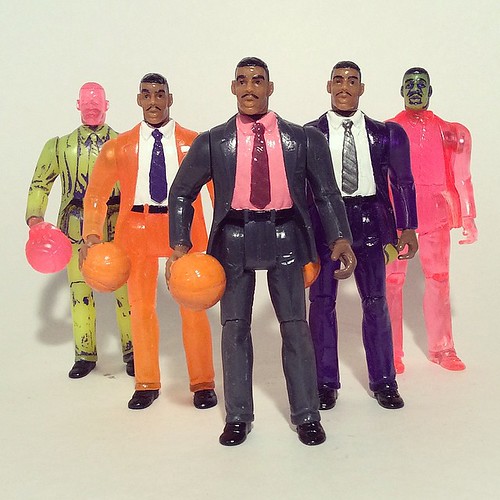 I had been scheming on a way to get my work highlighted in Sacramento, as I’m a huge fan of the all-over-the-place local art scene and figured that if anybody was going to introduce resin figures to the area, it might as well be Scraped Resin. I knew that Kevin Johnson was a somewhat polarizing figure within local government, and liked the idea of creating something that would slyly appeal to both fans and detractors. In researching the mayor, he doesn’t come across as a very sympathetic character: his raging political ambition, his multiple legal settlements, and questionable use of city funds. A few of my friends are fans of his, but when pressed, their only praise seems to be how he orchestrated the arena deal to keep the Kings, or how they saw him eating sushi at Zen few times. Now I love Zen’s salmon sashimi as much as the next guy, but as a non-basketball fan who actually works a couple blocks away from the construction, fuck that arena. Traffic’s gonna be fucked. Parking’s gonna be fucked. Rent is already getting fucked. People talk about how important Downtown renovation is, which I definitely get, but as a person that’s already lives here, I’m not personally invested in a campaign to bring more people to the area. But I get it, I get it. If we don’t have a national sports team, all of the other better cities will laugh at us and unfollow our shitball Instagram account. 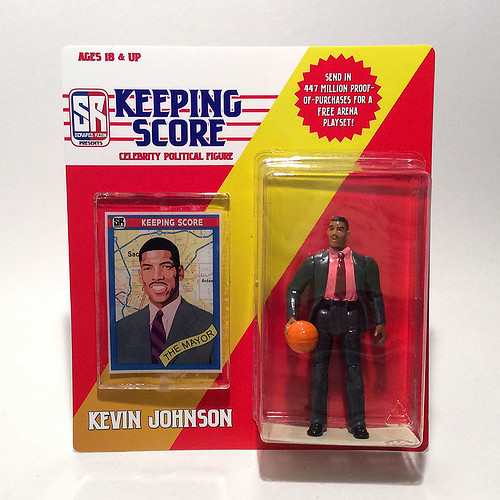 Maybe I’m wrong, and maybe this arena deal will give way to a golden era for Sacramento. I’d be okay with that. My point is that there is more to a leader than ensuring your Kings fandom doesn’t suddenly become obsolete, and if we’re going to elect sports celebrity from the 90’s to be our mayor, we should at the very least make sure he has our best interests in mind. We should keep score, if you will. And if the end result is something that gets Scraped Resin a little more recognition on a local scale, well then: mission accomplished! These 5.5” resin figures come with 3 points of magnetic articulation. They are packaged on a cardback featuring a trading card embedded in resin and resealable plastic bubble with magnetic properties that locks the figure in place. Pick up a Keeping Score action figure in the Scraped Resin online store today!
Posted by Robert Rodriguez at 11:18 AM No comments: